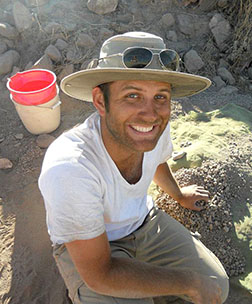 Chris graduated from UNCG in December of 2010 with a B.A. in Classical Studies, and again in 2012 with a B.A. in Archaeology. His most fond memories at UNCG include his membership in the UNCG Classical Society, participation in the first UNCG in Rome study abroad program in 2010, and his study abroad experiences in Peru during the summer of 2012. After leaving UNCG, Chris entered the Master of Information Science program at North Carolina Central University in Durham, NC. During that time, he also served as a graduate assistant for the Director of Graduate Studies for the Department of Library and Information Science. After graduating Summa Cum Laude in May of 2014, Chris began work for the American Institute for Certified Public Accountants (AICPA) as an Instructional Designer/Developer for the organization’s eLearning programs. As of 2016, Chris began a graduate certificate program for Instructional Design at NC State University.

As a local in the Greensboro and Triad area, Chris entered UNCG in 2005 and soon found his home in the Classics Department at UNCG. The friendly and familial staff and students in the department drew his interest with nearly as much strength as his own love for history drew him to the subject of classics. Chris views his time at UNCG in the Classics department as a time of growth, experience, and as a precious moment in his life where he created amazing memories and developed lasting friendships. Although he may not always find the time to see his old friends and peers from UNCG, he appreciates and cherishes the positive impact they have all had on his life.