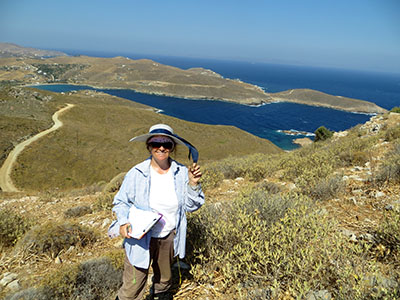 We have two artifact collection phases: Phase I, which is in essence a grab with the walkers placed 15m apart collecting a sample of the visible ancient cultural material; and Phase II, which is a re-visit to a site when we lay out a grid over the density and two walkers are assigned a grid square to conduct a timed grab and vacuum. In Phase I, the standard spatial interval between walkers in each tract is 15m apart. In keeping with the practice of the 1983 survey, however, this interval is raised as far as 30m when the teams were walking on collapsed terrace or extremely dense, spiky vegetation with low-visibility.
In Phase I, walkers collect all diagnostic ceramics and all lithics. We define diagnostic as having a distinctive shape, a recognizable body part, or a decoration. They also collect two samples of each fabric not represented in the diagnostics. In order not to flood the apotheke with artifacts and to have a more refined understanding of the location of the finds from Phase II pick-ups, in tracts with extremely high densities only one in five or ten diagnostics are brought back to the apotheke, but all sherds are included in the full count.
In Phase II, we lay out a grid over the area of a density. Depending on the spread of the density we subdivide the grid into 5m squares, 10m squares, or 20m squares. We continue laying out the grid until we reach an area free from artifacts. Two walkers are assigned a grid square in which to conduct a timed vacuum and grab. The vacuum circles in the 10m squared grid squares are 1.26cm in radius; in the larger squares they are doubled, and in the smaller squares they are halved. The walker in the vacuum circle bags all cultural material, while the walker in the grab area collects as much cultural material as they could see.

We record all our data digitally both in the field and in the apotheke. Each team leader is equipped with an iPad, which has a digitized, geo-referenced Greek military map loaded into iGIS. Google maps are also loaded onto this program so that the team leader can see their “real” position in relation to the landscape. Using the built-in GPS tracker on the iPad the team leaders record their position into iGIS and draw a polygon that illustrates the location of the tract. They record all details about the tract in File Maker Go: the iPad equivalent of the regular File Maker Pro. Using either TouchDraw or File Maker Go, they draw a sketch of their tract, indicating any natural or cultural features, the line-up of the walkers, and any noted densities. After the team has walked the tract, the team leaders record the distances walked, the number of observed artifacts, and the number of collected artifacts. The collected artifacts are bagged by tract and sub-divided by walker. These artifacts are brought to the apotheke where they are recorded, washed, and catalogued. Every evening the iPad data and the photographs taken in the field are uploaded into the“parent” copy of File Maker Pro (FMP) and ArcGIS. The photographs are linked in thumbnail form to FMP using Graphic Converter.
This data-recording system, devised by John Wallrodt of the University of Cincinnati, allows us to have an immediate digital record of our work which we can easily analyze.

KARS is a five year international, interdisciplinary archaeological project in Kea, Greece that focuses on the value of pedestrian survey as a methodology, connects the found sites to their environmental contexts and land use, and contextualizes Keian society to the wider geopolitical context of Greece and the Cycladic islands. Our core hypothesis is that due to the cultural and natural changes in landscape, the visibility of archaeological sites in the form of artifacts scatters changes. Our recreation of the past is based on the location, distribution, and contents of these scatters. Therefore any changes in the scatters will alter our story of the past. To explore this hypothesis our surface survey has three main aims: to test the reliability of intensive survey data to assess if it has lasting archaeological value; to increase the sample size taken by Cherry, Davis, and Mantzourani in order to address the enigmatic and notable lack of Bronze Age sites outside of the immediate Ayia Irini area; and to perform macro and microscopic ceramic analysis on the artifacts from the earlier survey and the proposed one to elucidate diachronically Kea’s role in trade networks of the area, and its role in the geopolitical landscape. Our team will create a base digital map of the area and conduct a surface survey where we will collect diagnostic artifacts, which we will catalog and analyze. Once we have identified areas of cultural activity we will conduct geophysical analysis of the area to ascertain any underlying, related structures and take soil cores to recreate the ancient land use. Specialists and undergraduates from Ireland, the USA, and Greece will be involved in the project as part of the concurrent field school.