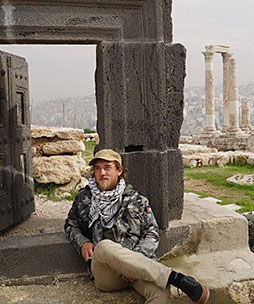 I graduated from UNCG in 2014 with a B.A. in Classical Studies (Language & Literature concentration) and History, and a minor in Archaeology. There I studied a variety of languages from Greek and Latin to Arabic and Syriac. Since 2013, I have worked with the University of Copenhagen on a variety of archaeological projects in Jordan such as the sites Jerash and Aylah. I have also been able to travel extensively around the Middle East. My current research focuses on the Syrian monastic communities of northern Syria and Mesopotamia during the Early Islamic period. I am currently working on a publication that covers the social networks surrounding the Monastery of Qenneshre. This coming Fall, I will begin New York University’s Institute for the Study of the Ancient World (ISAW) Ph.D. program to study Islamic History and Archaeology.