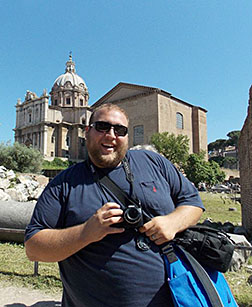 Lee Harris graduated from the University of North Carolina at Greensboro in 2014 with a Bachelor of Arts in Classical Studies, concentrating in Latin Education. He hails from a family of teachers and feels honored to be following in their footsteps. The mythology of Ancient Greece and Rome initially caught his attention and brought him into Jennie Buckner’s Latin class in high school. The UNCG Classics Department only increased Lee’s passion for the Classics, and provided him the tools he could use to instruct the next generation. Teaching a foreign language grants him the opportunity to see extraordinary children grow throughout their high school careers. He is especially appreciative of Dr. Maura Heyn and Dr. Jonathan Zarecki for leading the 2012 UNCG in Rome class and giving him the chance to experience the history rather than just reading about it. Lee is currently the Latin Teacher at West Forsyth High School in Clemmons, NC, where he has a growing Latin and Junior Classical League program. He is also planning to take his first group of students to Italy in June 2016.