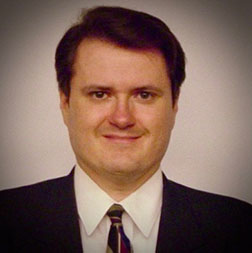 Ray Van Dyke graduated from UNCG in 1985 with a B.S. in Mathematics/Computer Science, and a Minor in Classical Greek with Dr. Susan Shelmerdine. He was also part of the Honors program at UNCG, and did his Honors Thesis on the Greek poet Hesiod, entitled “Near Eastern and Anatolian Influences on Hesiod’s Theogony,” with Dr. Stephen Ruzicka of the History Department. After UNCG, Ray went to the University of North Carolina at Chapel Hill, where he completed his Masters in Computer Science. He then completed his Juris Doctor at Chapel Hill and began the practice of law in New York City in 1990. After completing the patent bar examination, he became a licensed patent attorney. Ray also practiced in Dallas, Texas, where he became a partner at a major firm, and in 2001 he moved to the Washington, DC area where he lives today. He founded his own law firm, Van Dyke Law in 2010 in Washington, DC. Ray is also an Adjunct Professor in the Computer Technology Department of Southern Methodist University, where he has taught a course on the basics of intellectual property (IP), the history of technological development, the philosophy of intellectual property and other topics since 2000. He has spoken on IP topics throughout the U.S., Europe and China, South America and Mexico. He is the Chair of Washington, DC Chapter of the Licensing Executives Society, Chair of the IP Section of the Bar Association of Montgomery Maryland, a Fellow of the American Intellectual Property Law Association, and active in many other legal and technology groups. He has also published nearly 100 articles on IP-related topics, but occasionally writes on tech and recently on the mysteries of the constant pi, where he worked in famous Greek scientists and philosophers. An ongoing and avid student of science, technology, law, history, philosophy and classics, Ray works hard to keep up in an escalating world of technology and information, learning much of the latest technologies through helping his clientele patent, copyright and trademark their innovations. He also informally lobbies, testifies and otherwise assists the small inventor and patent communities to protect their interests through legislative and regulatory measures on Capitol Hill and in the United States Patent & Trademark Office. He lives in Maryland with his multi-talented wife Diana.