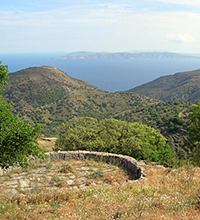 The Kea Archaeological Research Survey explores the reliability of surface survey as an archaeological method using the North West area of Kea as a test case. The project is run under the auspices of the Irish Institute of Hellenic Studies at Athens and the 21st Ephorate of Antiquities (Cyclades and Samos). One of the earliest intensive survey projects was conducted in NW Kea in 1983-4. The goal of our project is to walk over the surface of NW Kea collecting any cultural artifacts (usually pieces of pottery, stone tools, and metal slag); to map the distribution of these artifacts; to recreate a view of the ancient landscape of Kea; and to compare these results to the results found in the earlier survey.

In recent years, surface survey, as opposed to excavation, has dominated the methodological debate in Greek archaeology. Survey has exponentially increased the number of known/suspected archaeological sites and has presented a picture of a dynamic, inhabited landscape. The general underlying assumption of surface archaeology is that the landscape recreated from survey data is an accurate and enduring picture of the ancient landscape that informs us about land use, population density, politics, and trade in antiquity. While the value of this data has been questioned and tested, both in Greece and abroad, the key element of the long-term value of survey data has not been tested. KARS will make a significant contribution to this debate by testing the longevity of survey results using the Greek island of Kea as a case study. This project contributes directly to how we create knowledge in archaeology.

Kea (or Keos) is an ideal location for our project because it was systematically surveyed and extensively published. Kea was surveyed in 1983-1984 by an international team of archaeologists led by Cherry, Davis and Mantzourani. During the thirty years since the survey was conducted much of the activity on the island has changed; more houses are being built along the coast and less farming is being carried out in the fields. These changes in activity alter access to and visibility of archaeological sites. The vicissitudes of activity in the landscape raise the question of the accuracy and longevity of conclusions drawn from survey. Our project aims to question the long-term validity of survey data by resurveying Kea using both the same methodologies as the original surveyors and a more refined set of methods to see if we can still reach the same conclusions thirty years after. This will be the first project of its type in Greece and has the potential to confirm or dispute the value of survey as a reliable archaeological research method.

When Cherry, Davis and Mantzourani (hereafter C.D.M. (1991)) conducted a survey on Northwestern Kea; they produced the most intensive survey of the time in Greece. Since that time, for various reasons, surface survey has become one of the most popular methods in Greece for locating sites and reconstructing landscapes, trade, and social interactions (Alcock and Cherry 2004: Davis and Cherry 1990; Georgiou and Faraklas 1985; Kardulias 1994). The longevity of these results, however, have yet to be tested (Bintliff et al 2002; Shott 1995; Terrenato 2004; Wandsnider and Camilli 1992). For the scope of this project, longevity of results can be defined as the amount of time after the survey for which the results remain valid indicators of the ancient landscapes. This research question explores the assumption that surveys reconstruct an enduring, unchanging, and accurate portrayal of the ancient landscape and society (Barker 2000; Bintliff et al 2002; Cherry et al 1988; C.D.M. 1991). The amount of changes in land use that have taken place on Kea in the past thirty years, the intensive and systematic nature of C.D.M’s survey, and the small size of the area that C.D.M. covered make Northwestern Kea an ideal place to use as a case study to assess the validity of survey.

During the thirty years since the survey was conducted much of the activity on the island has changed; more houses are being built along the coast and less farming is being practiced in the fields. These changes in activity alter access to and visibility of archaeological sites. The vicissitudes of activity in the landscape raise the question of the accuracy and longevity of conclusions drawn from survey. By surveying Kea using the same methodologies as the original surveyors, this project will be a progression of the earlier survey and clearly show if we can still recreate the same ancient landscape thirty years later. This will be the first project of its type in Greece and has the potential to assess and refine our appreciation of the value of survey as a reliable archaeological research method.

Along with testing the validity of survey methodology, which will have an impact on world archaeology, we are attempting to refine our understanding of Kea’s cultural history. In the thirty years since C.D.M.’s survey, several major developments in Cycladic archaeology in survey, settlement patterns, and trade networks indicate that further analysis of this area of the island may change our view of Kea’s habitation patterns, trade connections, and Kea’s complex relationship with Crete (Agouridis 1997; Broodbank 1999, 2000; Carter 1998, 2000; Marthari 1998; Papagiannopoulou 1991). C.D.M.’s survey indicated that there were several Neolithic sites, which contrasts with the later Bronze Age pattern, where there were few Bronze Age sites outside of Ayia Irini. This data would suggest that there was a dramatic shift in habitation location and that the people were living at one major central location. This habitation pattern is strikingly different from other Cycladic islands.

The Melos survey indicated that there were several small, short-lived settlements outside the major sites (Renfrew and Wagstaff, 1982: Renfrew 2007). Such small, short-lived settlements, however, have complex archaeological signatures (i.e., they yield a relatively low number of cultural artifacts on the surface), and as research in the American south west has shown, with minimal cultural changes (such as plowing), or natural changes (such as flooding or erosion), these small sites can be hidden or revealed on the surface. The settlement pattern created from the Melos survey was further complicated when a second team re-visited Melos and found new sites on the surface in the areas previously walked. Based on the findings at Melos and the American south west (Sullivan 1998, 2008: Sullivan and Bayman 2007), of small sites and new sites appearing on the surface because of recent cultural and natural changes, we too should expect to find new sites in northwestern Kea. This suggests that further study of the area may change our understanding of not only the habitation patterns on Kea, but also how comparable it is to other Cycladic islands, and its relation to them and mainland Greece.

The project has benefited greatly from the generous co-operation and support of the Irish Institute of Hellenic Studies at Athens and the 21st Ephorate of Greek Antiquities (Cyclades and Samos).